As time moves ahead I feel like we’re moving closer and closer to living the same futuristic lifestyle once portrayed by the robot in the Jetsons (the cartoon series).

The cartoon represented how the world would appear in 2062 and that’s practically not too far.

And what’s made it more surreal is the fact that we might have a Rosey soon.

Rosey did almost everything from cleaning, babysitting, handling security – anything you could think of.

Well, what do you know!

Elon Musk recently announced that he along with his Tesla team are working on a humanoid robot.

What will it do?

According to the tech maestro himself,  “it could run to the grocery store for you” or manage any number of tasks that involve manual labour.

The Future of Robots (taking over the world)

This humanoid robot isn’t the first of its kind though its creators would like you to believe so.

Sophia, a social humanoid robot that was launched back in 2016 is one of the most popular examples of one.

This robot has already been on the world’s most popular shows with world leaders, politicians like Angela Market, comedians like Jimmy Fallon and has also been granted citizenship by Saudi Arabia.

And damn this robot has an exceptional sense of humour, here’s what she’s like if you’re unaware of her existence: 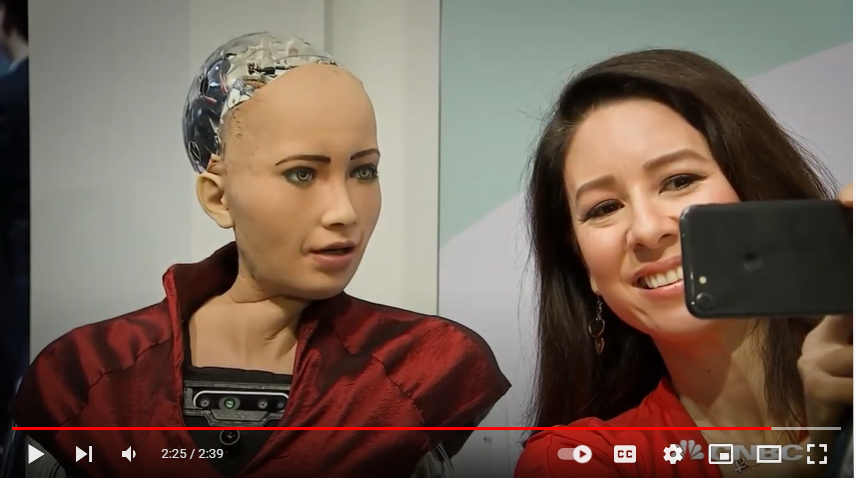 Coming back to what Elon Musk is promising the world.

This humanoid robot is as approximately tall as the average height of males in the U.S – 5-foot-8-inch and because it is built from lightweight materials, will weigh around 125 pounds (57 kilos).

However, it will have the power to carry a cargo of up to 20 kilograms.

During the launch, Elon Musk casually pointed out that it won’t be able to run faster than humans (for obvious reasons) and will be limited to a walking speed of 8 kilometres per hour.

What Makes This Robot A Smart One (if NOT loyal)

Since this robot is being developed by Tesla, you know it’s synonymous with the word smart.

The model takes its roots from the company’s car-making business.

The head, much like the Tesla cars, will be equipped with autopilot cameras to gauge the surroundings and sense the environment, operating via Tesla’s Full Self-Driving computer.

This data will be represented on a dashboard displaying full lengths of information, helping to make it smarter each day.

Musk seems to be taking a more human approach towards innovation – and the recently launched humanoid robot reminds of how he envisioned when he laid out his plans during the release of the infamous Tesla cars.

This integrated technology will include the extensive use of optical cameras connected to an AI ‘brain’. A similar approach he took for Tesla cars that help them autonomously navigate road systems.

Transforming the model from human-inspired “robots on wheels” to humanlike robots on legs; as in the words of Musk himself “designed for biological neural nets with optical imagers”.

What’s the purpose behind it?

I mean all this data being collected from thousands of self-driving vehicles must be put into practice.

This is exactly why all the camera and sensor collected data from these very vehicles will be used to train the neural networks behind Tesla’s self-driving technology.

Although all these initiatives are rather bold steps aimed at creating a not-so-far future where advanced technologies blend biology and technology to create a more futuristic culture for humans.

It’s safe to say that they have their own set of limitations which make them not-so-reliable. Such as in the case of Tesla’s Autopilot technology.

Several issues like crashes and fatalities have been previously associated with Tesla’s Autopilot mode – which makes these schemes look more like a rat race between billionaires competing to be declared or crowned the undisputed king of innovation and not actually a purposeful decision to make human life easier or safer.

Criticizing just for the sake of it is one thing, but these issues are too big to ignore with possible threats to privacy and autonomy increasing with each day.

These bots will be powered to collect, share and act on potentially sensitive information. As a result, may cause potential misalignments between ethical or ideological perspectives – for example when talking about putting empathy at the heart of decision making rather than just rational ideology.

In instances where crime control or policing civil protests are taken as an example – these newly formed challenges will be beyond human control and overlooking them can spell disaster.

As always if you enjoyed reading, we hope that you can share among interested people such as yourself and help us get better at this initiative of sharing information.

We want to give access to information in an unmatched experience. You might have noticed the lack of ads on our website, and there is a reason for it – we want to keep it this way and through your love and support, we can!

Listen To Us For Free On Your Favourite Podcast App

His obsession for creating history can be contagious or drive you insane, we mean it!
Tags: News, Thought Piece